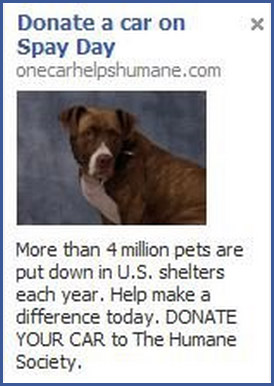 Have you seen this advertisement from the Humane Society of the United States? We hadn’t, but one of our perceptive Facebook followers pointed it out to us on Wednesday. It’s an ad promoting a donate-a-vehicle program that benefits HSUS.

There’s nothing wrong, of course, with charities using car donation programs to raise money. Most major national nonprofits do it, and the resulting tax deduction can make it a win-win for consumers. But what concerns us about this ad is what it implies about HSUS’s programs—and how car donors think the proceeds will be spent.

Here’s the text of the ad. Remembering that less than one percent of HSUS’s budget consists of grants to pet shelters, do you notice anything amiss?

More than 4 million pets are
put down in U.S. shelters
each year. Help make a
difference today. DONATE
YOUR CAR to The Humane
Society.

The Facebook ad suggests that HSUS will use the cash from your clunker to work on two specific problems: limiting the number of pets euthanized in shelters, and spaying/neutering pets (via its “Spay Day” promotion) to limit future puppy and kitten births.

But where is all the money actually going?

When you visit the website in HSUS's Facebook ad, you learn that the money is actually earmarked for HSUS’s anti-dogfighting campaign:

Donate a vehicle you're not using to One Car One Difference, and [Insurance Auto Auctions] will convert it at auction into cash for The Humane Society of the United States End Dogfighting™ program.

Ending dogfighting is a great goal, but it has nothing to do with shelter euthanasia or sterilizing pets (the issues in the Facebook ad).

How would Americans react if the Red Cross were raising money for victims of the 9/11 attacks—and then using the proceeds to build up blood-bank supplies for the future instead? We don’t have to wonder, since this actually happened. The public was justifiably outraged. Some donors demanded (and received) refunds. The Red Cross’s CEO even stepped down.

No one disputed that both programs were worthwhile, but donors shouldn’t be baited-and-switched.

If HSUS is really trying to raise money for its anti-dogfighting program, why not just say so? Has HSUS calculated that the “shelter” language will bring more donations? Has its very public friendship with convicted dogfighting kingpin Michael Vick ironically made it harder to raise money to "End Dogfighting"?

The way this Facebook ad reads to us, average pet lovers will think HSUS is using a substantial part of its wealth (and all of the dollars raised from car donations) to address the problems faced by underfunded pet shelters. (It’s a lack of funds, after all, that prevents shelters from keeping dogs and cats alive long enough to be adopted.)

That, sadly, is not the case. Americans who want to “make a difference” for shelter animals will be better off seeking out real humane societies in their own communities. HSUS’s record of earmarking less than one percent for shelters speaks for itself.

Ads like this provide solid evidence of HSUS’s fundraising dishonesty. We hope shining a bright light on it will, in the long run, help keep HSUS honest. If you come across any other HSUS fundraising efforts (online or otherwise) that don’t pass the “smell test,” please drop us a line and tell us about it.