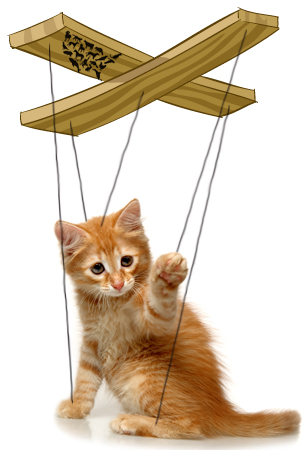 During the holiday season, people tend to open up their wallets more generously, especially as charities make year-end appeals. A reader suggested that we look at some professional material on what constitutes ethical fundraising. We did, and made some noteworthy discoveries.

This post will be a bit long, so here’s the Cliff’s Notes version: The Humane Society of the United States' (HSUS) fundraising is rather unethical.

Of the four models of fundraising Kathleen Kelly describes in Effective Fund-raising Management, HSUS clearly uses the “press agentry” model. (Don’t fall asleep—we’ll keep the boring academic terms to a minimum. We promise.) The purpose of this style of fundraising, which the other three don’t share, is to propagandize. It’s designed to get publicity or influence the audience to do what the messenger wants. For fundraisers, this means getting people to write checks. (You can get a feel for the other three models of fundraising, and how they differ, on Google Books.)

In this model, the truth isn’t important. After all, it’s about propaganda. “Press agentry” fundraising relies on emotional appeals to influence opinion or action, shirking the burden of truthfulness or analysis. This model, Kelly writes, “is the most unethical and socially irresponsible of the four.” And it’s a perfect fit for HSUS.

Let’s take some recent HSUS fundraising letters that readers have sent us. How do they fit the model?

Consider the language used. In one letter, HSUS writes that “the only way we can make these critical life-saving programs work and help save the lives of puppies and kittens in peril is with the continued support of our very best members such as you.” Elsewhere, HSUS asks, “How can we save these innocent puppies and kittens and find them good, loving homes?” In another section, HSUS claims that “disgraceful cruelty, neglect, and abuse […] appears to be increasing at an alarming rate all across the county.”

How is this emotionally manipulative? Well, “guilt is the gift that keeps on giving,” as the saying goes. The clear implication is that if you don’t open up your wallet, these poor little animals will all suffer. And you wouldn’t want to be responsible for that, would you? (To ram the point home, HSUS helpfully encloses a snapshot of an appropriately cute puppy and kitten.)

HSUS also uses loaded, creepy buzzwords to push emotion buttons. What are these “puppy mills” and “factory farms”? We never know, because HSUS never actually defines them. They’re frighteningly nonspecific “bad” places where animal cruelty goes on. In place of a real analysis of the problem or the solution, there’s a not-so-subtle invitation to let your worst nightmares run wild.

That’s not to mention the tchotchkes that are included in some HSUS mailings, which can create or reinforce that guilty, obligated feeling to give.

As for HSUS’s TV appeals, they have a pretty simple formula. Show tear-jerking images of cats and dogs (there’s that emotional reaction again), play music slow and sad enough to make you feel awful about any image on the screen, and make vague claims such as “many more animals urgently need help” without getting into details. (Where? How will your donation help them? What will HSUS actually do?)

As a rule, truthfulness is not top priority in press agentry fundraising. We’ve documented how HSUS’s fundraising is clearly misleading. Through the heavy use of dogs and cats, HSUS gives off the image that it’s in the pet-sheltering business. In reality, however, HSUS doesn’t run a single shelter, and isn’t even the leader in providing hands-on care to animals, despite having a massive $126 million budget.

Of course, plenty of nonprofits use similar tactics across all kinds of issues. HSUS is by no means the sole offender when it comes to using the “most unethical and socially irresponsible” model of fundraising. With animals we humans like to keep as pets, it’s just so easy.