Is Modern Man a Part of Nature, or Apart from Nature? - HumaneWatch 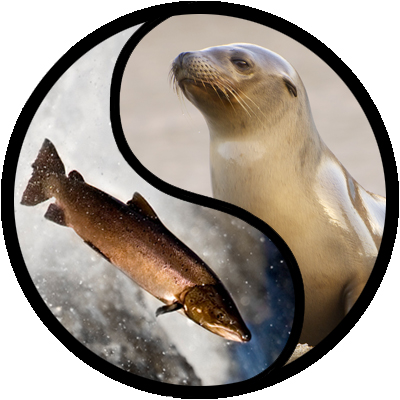 We’ve written before about the “humane paradox,” namely that the “protecting ‘all animals’” goal of the Humane Society of the United States (HSUS) ultimately falls apart when some animals naturally harm other animals. Lions eat gazelles, after all—an act that surely violates the gazelle’s “right” to live and provides it a less than humane death.

An HSUS lawsuit filed last week against the National Marine Fisheries Service ups the ante even further: HSUS is objecting to the government agency’s chosen method of resolving the conflict between two endangered species.

The Bonneville Dam is on the Washington-Oregon border, about 150 miles up the Columbia River from the Pacific Ocean. Sea lions congregate there and feast on the salmon population.

The dam, naturally, has made it hard for the fish to get further upstream, despite “fish ladders” built to facilitate their travel. It’s easy pickings for the sea lions, but this puts them in competition with both four Native American tribes authorized to fish for salmon, as well as conservation efforts designed to protect them. The National Marine Fisheries Service has chosen to reconcile these competing interests by killing a few of the seals with the biggest appetites.

It’s debatable whether it’s necessary for the government to mark some of the “troublesome” sea lions for a euphemistic “lethal taking.” Still, the feds have only killed 27 animals under this program since 2008—or about 0.01 percent of the 265,000-strong California sea lion population.

HSUS, predictably, objects to every seal death. But one of its affiliated organizations is at least daring to ask the obvious: “[W]hen one endangered species is the main food source for yet another endangered species..how do you protect them both?”

"The National Marine Fisheries Service's decision to kill hundreds of native marine mammals to reduce salmon losses," while simultaneously authorizing large catches by people, "is both outrageous and patently illegal."

Is he right? It’s a fair question.

So keeping more seals alive wouldn’t change the balance of power too much. But more fish would be killed because there would be more marine-mammal mouths to feed. (What about the fish? Don’t salmon deserve a dedicated HSUS attorney?)

If it seems like HSUS’s is picking sides between two threatened species, there may be a good reason.

If we’ve learned anything from HSUS’s annual anti-seal-hunting media blitz in Canada, it’s that seals are cute and they make for great fundraising. Compared to a scaly, craw-mouthed salmon, seals are a near-ideal poster-animal.

HSUS, the consummate “factory fundraising” organization, knows this full well. The same fundraising strategists who put so many dogs and cats in HSUS’s TV ads (even though little of the money HSUS raises goes to pet shelters) can figure it out faster than you can say “nineteen dollars a month.”

So it wouldn’t surprise us if HSUS is siding with the sea lion over the salmon out of future fundraising consideration.

It’s also curious that HSUS chooses to aim its disdain at the human use of salmon. One member of the Yakama Tribe (which is among four Native American tribes authorized to fish for the salmon) tells the Journal: "They call them [the sea lions] natural predators, but they're not. We’re the original natural predators here.”

In other words, people are a part of nature, too. Man has always hunted and fished for food, even in competition with other species. We still rely on nature today. And as anyone who’s seen a raccoon going through his garbage knows, sometimes nature uses us.

Instead of allowing human “animals” their place in nature’s supply-and-demand game, HSUS seems to be limiting us to the role of a referee. Is that “natural”? Will it produce better wildlife management results than a government biologist’s plans, especially for endangered species?

Bonus question: Could HSUS save more animals than just 27 seals—physically save them—if it shifted its legal budget to rehabilitating and adopting out homeless dogs and cats? Almost certainly. But seals are so cute in fundraising letters. And a staff of more than 30 lawyers has to have something to do.