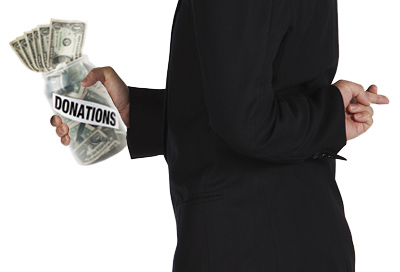 We reported some troubling news last year: The Humane Society of the United States uses certain fundraising companies that keep most of the donations solicited from animal lovers on its behalf. Using the New York Attorney General’s annual “Pennies for Charity” report, we discovered that out of $12.2 million raised for HSUS’s benefit between 2000 and 2009 in New York, just 7.12% actually went to the animal rights group, thanks to other state filings, we have new data. Unfortunately (but not shockingly), much of the money people think is going to HSUS is still getting vacuumed up by professional dial-for-dollars companies.

According to filings submitted to the Massachusetts Attorney General, fundraising firm The Share Group raised slightly over $24 million on behalf of HSUS in 2009, and just 3.64 percent — less than $875,000 — actually went to HSUS.

It gets even worse for other fundraisers. RMG Inc. raised $108,000 for HSUS, and HSUS ran at a net loss, paying RMG $46,000 for the privilege. That’s a return of negative 42.75 percent. HSUS’s return with "Donor Services Group" was an abysmal negative 335 percent.

The numbers aren’t much better for HSUS’s affiliated organizations. Just 11 percent of the revenue of The Share Group’s campaign for the Humane Society Legislative Fund actually went to HSLF. And the Doris Day Animal League had a negative 2.6 percent return for its campaign with The Share Group. The one bright spot was DDAL’s campaign with Public Interest Communications, in which the organization retained 45 percent of the revenue, though it was a fairly small campaign.

The North Carolina Secretary of State has even more recent filings. According to those campaign reports, just 15.5 percent of the $1.7 million The Share Group raised on behalf of HSUS last year actually went where donors thought it was headed.

Shocked? You should be. These firms (and HSUS) manipulate donors’ emotions by playing on their sympathy for dogs and cats and their disgust for animal cruelty, while a fundraising company siphons off most of the money.

Here’s how the game works: The professional fundraising firms keep the short-term donations, but HSUS gets to keep the mailing list. (By looking at some of the fundraising contracts, you can see that HSUS agrees that the telemarketing firm will keep more than 95 percent of the money.) In the long run, HSUS can appeal to these donors without such a middleman. And in the meantime, it can puff up its “constituency.”

Share Group and HSUS just signed a new contract, so this nonsense will go on through 2013. According to the terms, HSUS is only expected to receive 1 percent of the revenue of the company's telemarketing campaign.

Whether HSUS’s massive overhead costs are put towards its pension plan, its bloated staff or its telemarketers, there’s one place that money isn’t going: America’s cats and dogs.