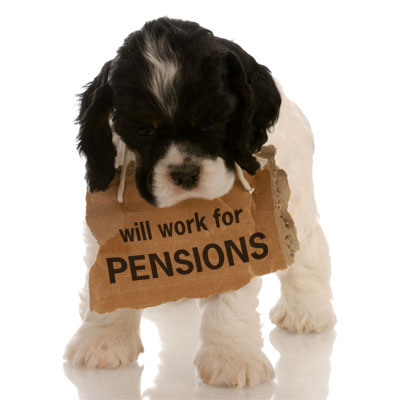 The Humane Society of the United States, which is not affiliated with community-based humane societies, is a very wealthy organization. In 2009 its budget was more than $121 million, and the HSUS network had more than $191 million in assets at the end of 2009.

Despite the financial ability to run a pet shelter in every state, HSUS doesn’t run a single one. And it shared only four-fifths of one percent of its budget with pet shelters during 2009. (HSUS hasn’t filed its 2010 taxes yet.)

We’re often asked a simple question: Where does all that money go, if not to real humane societies?

And a tremendous amount of HSUS’s revenue is diverted to its executive pension plan, which has grown by $11 million since Wayne Pacelle took over as CEO in 2004.

Let’s take a look at how HSUS’s pension-plan spending compares with its pet-shelter support. (The bottom line: Not well.)

We went through HSUS’s 12 most recent tax returns, covering the years 1998 through 2009. And we made a startling discovery: Overall, HSUS’s self-serving pensions got more money than pet shelters.

The “Humane Society” of the United States spends more looking out for its own leaders than providing funds to help pet shelters. In most years, it spends several times more. (The uptick in shelter grants from 2005 through 2007 was mostly due to one-time grants following Hurricane Katrina, which is the least HSUS could do considering it raked in a reported $34 million after the disaster.)

It’s certainly not a bad thing that HSUS has spent $14.8 million, by our count, on pet shelters during the last 12 years. But it could have spent 10 or 20 times that amount. Without breaking a sweat.

This month the State Humane Association of California filed a complaint with the state Attorney General against the fundraising tactics of the American Society for the Prevention of Cruelty to Animals (ASPCA), arguing that many of that organization’s donors incorrectly believe money sent to the ASPCA comes back to Golden State pet shelters. That move prompted the editor of the Whole Dog Journal to write that ASPCA ads should come with a disclaimer warning viewers that money sent to New York may not aid California shelters.

Maybe HSUS ads should come with a disclaimer too—not just to warn people that real humane societies will get less than 16 cents of its “$19 a month” infomercial request, but that an even larger amount will fund the retirements of HSUS executives.