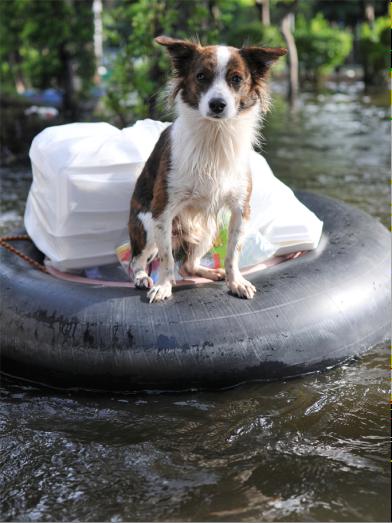 Hurricane Isaac rolled through the Gulf states last week, and fortunately it was far less damaging than Hurricane Katrina. But plenty of people—and animals—were still in need, and one of the groups helping has been the Humane Society of the U.S. Or at least, kind of.

According to the YesBiscuit! blog, HSUS has been transporting pets from the Gulf area to shelter partners in other states. One such shelter, which has a euthanasia rate of 50 percent, received 17 animals.

How many of these animals are still alive—and is this really providing “relief”? Will HSUS provide a full accounting of all of the pets it is “rescuing” from the disaster area?

Speaking of accounting, a full and public accounting of the money HSUS raises should also be provided. A visit to HSUS’s website over the weekend brought a “pop-up” plea for money for HSUS’s animal rescue team. We can only imagine the haul.

There’s no guarantee the money will be used for Hurricane Isaac, by the way, which makes sense when you look into how little HSUS has apparently been doing. From what we’ve gleaned from reports, HSUS has:

In the meantime, the London Daily Mail reports that a local SPCA also transported nearly 200 animals to Texas. In other words, local groups are able to do—and are doing—the exact same things HSUS can do. They’re just the unsung heroes, while HSUS is the photo-happy braggart. (Along with the constant pleas for money, we count 10 press releases from HSUS about Isaac.)

It seems there’s not a disaster that goes by that HSUS doesn’t try to milk for money or PR. HSUS dithered in the Gulf states after the BP oil spill. HSUS put out a plea for “emergency” donations after the Haiti earthquake—even though an expert working with HSUS’s global arm admitted there was nothing that could be done at the time. And let’s not even talk about Hurricane Katrina (or the false fundraising pledge to “care for the dogs seized in the Michael Vick case”).

Here’s an idea: Would it be so hard for HSUS to tap into its $200 million in assets to build a pet shelter in the Gulf area that provides a place for animals to stay until things get settled? Or to start writing six- and seven-figure checks to local groups that have a handle on things or that are taking in the pets that HSUS is trucking around?

After all, HSUS is a group that puts more money into its pension plan than it gives to shelters. The way it is right now, HSUS is happy to raise money left and right while providing what seems to be lackluster performance, given its resources.

Or there’s always an easier option for concerned Americans: Give directly to local groups.