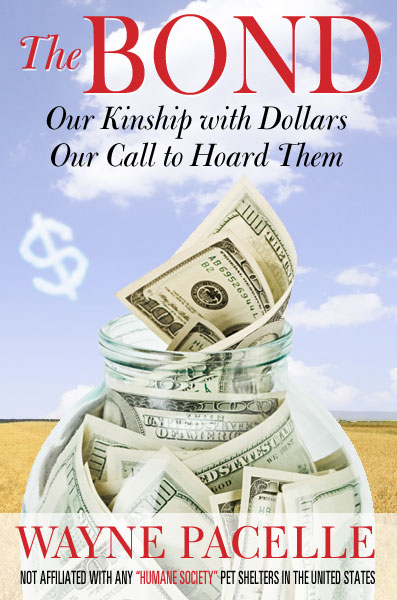 Humane Society of the United States President Wayne Pacelle’s first book, The Bond, will be released next week. As you might expect, there’s been a bit of media buzz. (HSUS has even released video “trailers” for the book.) And now HarperCollins, Pacelle’s publisher, has launched a photo contest to promote the feel-good vanity project.

Pacelle, of course, has been plugging his book on his blog. What strikes us as peculiar, though, is the number of times Pacelle has blogged about encouraging pet adoption in recent weeks. (This is something we unequivocally support, by the way.)

In the past two weeks, Pacelle has written three blog articles (here, here, and here) about adoption—normally, the topic doesn’t come up all that much. This certainly seems like a calculated move to boost Pacelle’s “cat and dog” image in the days leading up to his book tour. (Since HSUS spends so much of its donors’ money on fundraising, Pacelle seems more qualified to talk about The Bond between HSUS’s bank account and its TV mini-infomercials.)

It’s good PR, but it no doubt will further the public misperception about what HSUS is. Most Americans think the Humane Society of the United States is a pet shelter umbrella group, that it’s affiliated with local humane societies, and that Pacelle gives most of HSUS’s money to pet shelters.

HSUS is none of these things, although its marketing and fundraising materials imply otherwise. The material support HSUS offers to homeless pets is worlds apart from Pacelle’s rhetoric.

Data from HSUS’s most recent tax returns indicate that the organization shares less than 1 percent of its fundraising haul with hands-on dog and cat shelters each year. HSUS has $192 million in assets: It could afford to build and operate a pet shelter in every state, but it doesn’t run a single one anywhere.

The HarperCollins photo contest accompanying The Bond speaks volumes. A single Grand Prize winner will win a $1,000 donation (in his or her name) to a pet shelter that “partners” with HSUS. Just one winner, and just $1,000 going from HSUS to a pet shelter.

Can’t HSUS do more? A “humane society” with a $121 million annual budget giving a mere $1,000 to a pet shelter is like Yale University awarding a free textbook to a lucky freshman, or the Red Cross giving away a free gauze pad.

Talk is cheap. If HSUS wants to walk the walk, it should shift its spending priorities to be in line with what Americans think it’s already doing. We’re approaching the first anniversary of our “50 Percent Pledge,” challenging the Humane Society of the United States to earmark half of its budget for pet shelters. We’re willing to completely shut down HumaneWatch if HSUS steps up to the plate in this very reasonable way.

So far, Wayne Pacelle hasn’t replied to our challenge. But any time the Humane Society of the United States feels like putting its money where its CEO’s mouth is, pet lovers, pet shelters, and homeless pets will surely welcome the change. Perhaps someone at one of Pacelle’s many book signings will ask why his group won’t offer more financial support for the humane societies doing all the heavy lifting in communities all over America.