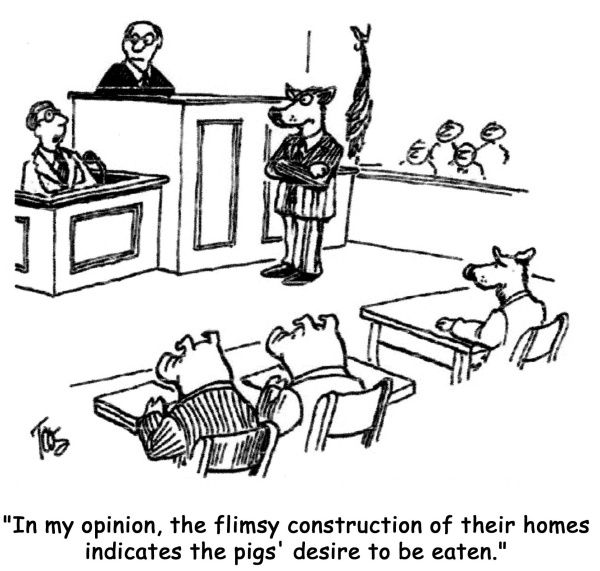 What’s at stake? Quite a lot.

Current law holds that animals are property. Your car, your house, and your chair can’t sue you. Neither can animals. Animal welfare is enshrined in law to ensure good treatment. But animals aren’t considered people and therefore don’t have standing to be party in a lawsuit, despite PETA’s lamest efforts.

The day’s first speaker was local attorney Sean Day, a hardcore believer in legal “rights” for animals. In fact, Day won’t take any clients who agree with current law that animals are property.

Day’s view was in the minority among speakers, many of whom were simply pointing out how to work within the legal system, as opposed to radicalizing it. Even HSUS’s first speaker stuck to a moderate script of discussing evidence collection during animal seizures.

But later in the day, things got interesting. We were treated to a dandy propaganda-fest from the general counsel for Compassion Over Killing. (Day used to be pro bono counsel for COK.) COK’s counsel went through how animal agriculture is cruel—par for the course. Sharing her panel was an HSUS attorney who seemed moderate by comparison, discussing how HSUS can “get creative” in using current federal law to file lawsuits.

We say “seemed moderate” because that’s the big joke: The variance between HSUS and COK is a distinction without a difference. Consider that Carter Dillard was a COK lawyer before joining HSUS. COK co-founder Paul Shapiro runs HSUS’s farm-animal campaign. Former COK president Miyun Park was an HSUS VP when she stated that HSUS’s goal is to “get rid of the entire [animal agriculture] industry.” COK seems to be a breeding ground (activist mill?) for future HSUS personnel.

The two groups may speak differently in public, but they’re on Team Animal Rights with PETA, ALDF, and others. Birds of a feather fly together. HSUS personnel sat on a panel with a counsel from COK, Farm Sanctuary, and PETA a few years back.  HSUS has actually written about this giving legal “rights” to animals in past fundraising material.

Skeptics might say this just circumstantial and a bit dated. Fortunately, we have the transcript of a panel that HSUS Senior VP Jonthan Lovvorn sat on in 2006. Lovvorn runs HSUS’s legal activism. (You might remember him as a defendant in an ongoing racketeering lawsuit.)

The panel was on animal standing. Lovvorn was joined by his former colleague, Katherine Meyer, and Joyce Tischler, founder of the Animal Legal Defense Fund. We highly advise you read the whole thing, but we’ll print the meatiest parts here.

Here’s Meyer and Lovvorn responding to an audience question about how slow the process of legal change—moving away from the concept of animals as property—was going (emphasis added):

Meyer: Everything everybody is doing is helpful to that cause. This is a movement. We would all like it to go faster. There is a lot to do, but Steve Wise’s books, and the works of other people who are writing about the issues, are very important.

All of the cases that Jonathan [Lovvorn] is handling, cases we are handling for groups, all of it adds up to what David [Cassuto] was saying: we need to make these actions politically incorrect, we have to generate that public outrage. We have to make it politically incorrect to do these things, such as considering animals as property….

With these farming issues—it is very important what HSUS is doing, as are other groups—we about talking about billions of animals. You have to do it incrementally. This is not going to divulge any great secret, but a lot of us here in this room are looking for the right sets of facts to bring those first guardian ad litem cases. This is where we are going. The way you get there is by bringing other cases first. …

Lovvorn: Certainly, the situation with regard to the property status of animals, the courts, Article III, and our ability to get what we want is frustrating. The problem is, right now, no member of Congress would even introduce a resolution saying that animals are not property.

It seems quite clear to us that this crew is united in its outlook, and practical in its means, chipping away slowly. Meyer, Lovvorn, and their ilk all want to eventually be the legal guardians for animals—especially farm animals. The practical effects of this will be for HSUS to sue Old MacDonald on behalf of his ducks and chickens, singing E-I-E-I-O to the tofu bar.

And if you think the animal rights crowd will be satisfied with eliminating meat, milk, and eggs, think again. Some wacky lawyer could sue on behalf of even pets—excuse us, companion animals—to “liberate” them from their human “slaveholders.” We wouldn’t put it past PETA to sue blind people on “behalf” of seeing-eye dogs.

We can joke about how silly it seems, but it is a very real possibility with dedicated people working towards these ends. HSUS had 3 lawyers when Wayne Pacelle took over in 2004. In 2010, Pacelle stated they had “about 50” on staff, not to mention a network of pro bono attorneys.

Can we afford to let them win?