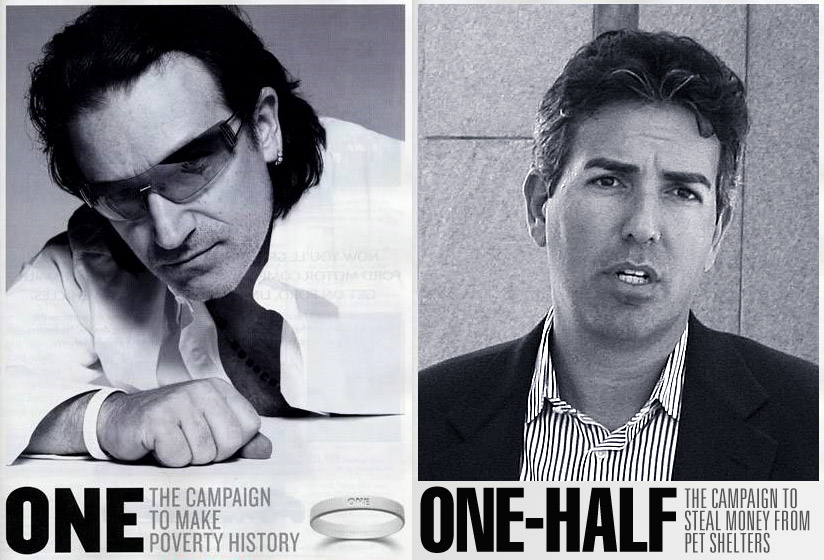 If you’re already “in the know” about the Humane Society of the United States, this story should sound awfully familiar.

Yesterday the London Daily Mail reported on a breaking charity scandal: The anti-poverty nonprofit group ONE (the one run by U2 lead singer Bono’s) doesn’t actually give very much money to the poor. And the details are reminiscent of another charity that's fond of hiding the ball:

Bono's anti-poverty foundation ONE is under pressure to explain its lavish salaries after it was revealed that only a small percentage of money it raises reaches the needy.

The figures published by the New York Post also show that £5.1m went towards paying salaries.

And if that isn’t bad enough, the Post reports that ONE sent out “cookies, water, rulers, leather notebooks, coffee, Band-Aids and pens” for promotional media mailings. (Gee, nothing helps the poor like pens and rulers.)

Getting a little déjà vu? This scandal almost exactly mimics HSUS’s situation. Except that HSUS spends even fewer dollars on its supposed purpose.

Less than one-half of one percent of HSUS’s budget goes to hands-on pet shelters. (Even Bono’s charity runs laps around that number) And HSUS spends massively on salaries and benefits—$37.8 million in 2008, more than one-third of its budget. That figure may now be almost $50 million as HSUS's staff has expanded.

More than $8 million has gone to executive pension plans since 2004. And yes, HSUS blows plenty of money on its fair share of junky promotional gizmos.

In response to the breaking news, a ONE spokesman rebutted that “We don't provide programmes on the ground. We're an advocacy and campaigning organization.”

That sounds exactly like HSUS’s excuse for not contributing more money and effort to the direct care of pets in need, doesn't it?

Where’s the outrage about the chasm between HSUS’s image and its performance? Perhaps it will take a few more daring reporters—or a hit single from Wayne Pacelle—for this parallel scandal to attract the attention it deserves.

If nothing else, now we know why Bono named his charity "ONE." It may be time for HSUS to be renamed "ONE-HALF."