UPDATE: As usual, it has fallen to us to try and keep HSUS honest. About nine hours after we published this article, and four hours after our Editor discussed it on KOA-850 radio in Denver, HSUS has quietly begun to add disclaimers to its online fundraising pitches about "Second Chance." They generally disclose that the horse was recently euthanized, but ask the public to donate anyway "in memory of" Second Chance. As of 3pm EST on December 30, Wayne Pacelle has not updated his December 20 fundraising blog article about the now-deceased horse.

Meet Second Chance, a horse that we rescued from a horrific neglect situation. Watch his story of survival!

No, this "Second Chance" article isn’t another story about Michael Vick.

It’s about a horse the Humane Society of the United States has been using since December 20 in its end-of-year fundraising scheme. 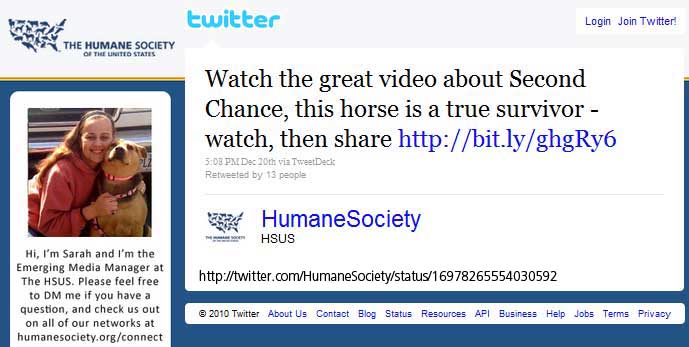 Watch the great video about Second Chance, this horse is a true survivor – watch, then share

Second Chance’s story is one of three such tales HSUS is telling and re-telling this month in its attempt to reach a $1.2 million fundraising payday. There’s Boomer the dog. There’s Powell the cat. And, of course, Second Chance the quarter-horse.

Second Chance has gone from a walking skeleton to a beautiful horse on the road to recovery. Watch Second Chance’s inspiring story, then make a tax-deductible donation below to help us continue our lifesaving work for animals like Second Chance.

There are two problems with the “Second Chance” story HSUS is pushing. For one, many observers say HSUS caused the situation that led to horses like Second Chance needing rescue in the first place. (More on that later.)

And also, Second Chance is dead.

Today, you wouldn’t recognize Second Chance as he grazes contentedly in the pastures of his new loving home, back to a healthy weight and having regained his strength.

To be fair, we learned from the HSUS website that Second Chance was euthanized this week. But most people who encounter fundraising pitches related to this horse will never know. From our informal count, there are at least nine separate ways to reach a fundraising “ask” that tells the story of Second Chance. Just one of them leads to this:

Updated on December 29: We are devastated to report that Second Chance was recently euthanized due to a severe and untreatable case of colic, a gastrointestinal condition that is a leading cause of death in horses. Our hearts go out to his family.

At right is Second Chance's original story of survival. Although he is no longer with us, his life will continue to inspire us in our campaigns to end animal neglect and fight other large-scale abuses inflicted on animals.

If you would still like to make a donation to our 2010 Animal Survivors Fund in memory of Second Chance, we would appreciate it. Please make your tax-deductible gift on the secure form below. If you'd prefer to give a monthly gift, please click here. 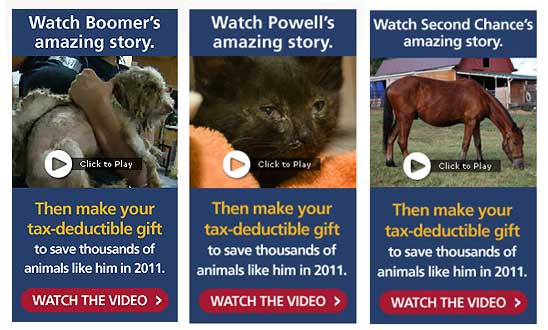 Come to think of it, how are we to know if Boomer the dog and Powell the cat are still around?

Fair question? Absolutely. Earlier this week we told you about an HSUS animal rescue in Alabama that resulted in dogs being sent to a North Carolina pet shelter best known for its gas chamber. Some of those “rescued” pups are already in landfills somewhere. (The thoughtful and passionate "YesBiscuit!" blog has the latest on that case this morning.)

So what of Boomer and Powell? Do many of HSUS’s “Animal Survivors” actually, y'know … survive? We just don’t know.

We do know about the ironically named Second Chance.  He was one of nearly four dozen horses found in various stages of starvation and neglect. This is seriously disturbing stuff, but equally disturbing is the set of economic circumstances that have overwhelmed horse owners in recent years.

KLTV-7 in East Texas asked HSUS what horse owners should do if they can no longer afford to care for their animals:

The Humane Society of the United States encourages horse owners who are no longer able to care for their pets humanely, to consider some of the following options: 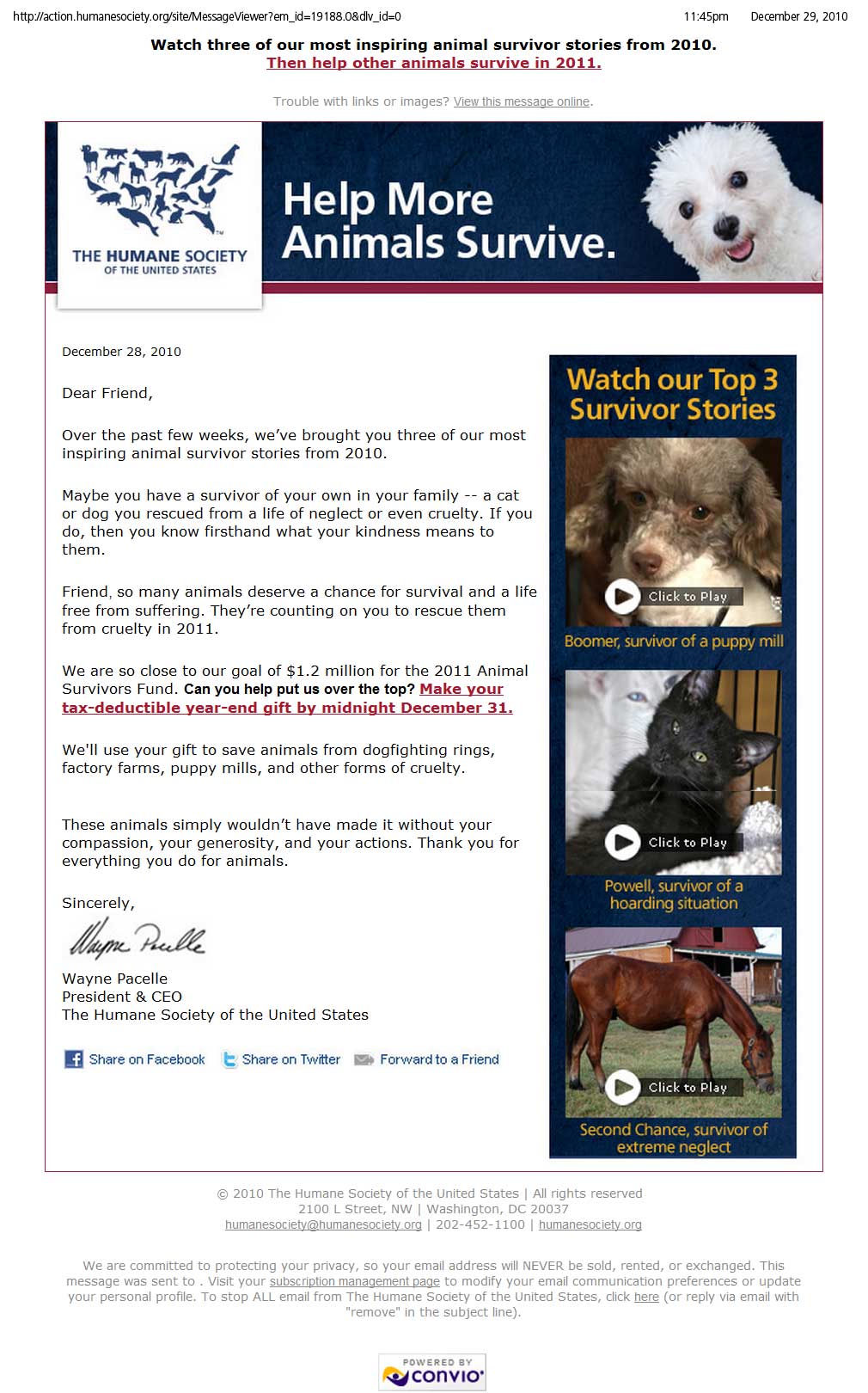 These are all legitimate options, of course, if not actually practical. The bottom has fallen out of the live-horse market in recent years. Veterinarian-in-training Jake Geis told us this month: “We can buy registered yearling foals at horse sales for $50 or less. We’ve bought them for as little as $10. I can get a horse for less than the cost of a good meal!”

And it’s not like horse sanctuaries, park police, or charities in the U.S. have the capacity to handle the problem. The American Veterinary Medical Association (AVMA) estimates that there are more than 100,000 unwanted horses in America each year, a crisis that would require 2,700 new horse sanctuaries to effectively manage.

Until four years ago, sending unwanted horses to slaughter was a viable option. But a series of judicial rulings and HSUS-lobbied state laws has effectively shut down that industry.

There are powerful arguments on both side of the "should we slaughter horses?" issue, and it's far too complex a subject to treat fairly here.

But nothing we do in this country will change the fact that over 1 billion people in the world eat horse meat. And where there’s a demand, a supply will follow. The AVMA reports that during the year after Americans stopped slaughtering unwanted horses, the number shipped great distances to Mexico for slaughter jumped more than 300 percent. (Mexican slaughterers typically employ inhumane methods that animal welfare scientist Temple Grandin calls “horrific beyond belief.”)

But in the current economy, many American horse owners who can’t afford to feed their animals also can’t afford to pay a veterinarian the $500 it typically costs to euthanize and bury a single horse.

This, many horse owners tell us, is why cases of horse neglect are on the rise. This is why “Second Chance” needed rescuing. Put simply, cases of horse neglect and abandonment are skyrocketing, largely because HSUS—even if its intentions were as benign as you can imagine—failed to recognize the perverse consequences that would inevitably result.

HSUS led the effort to shut horse slaughterhouses down. It also wants a federal law banning the export of horses for slaughter. Should this come to pass, we can expect more unwanted horses to be abandoned, turned loose, or otherwise turn up in need of a “rescue” that HSUS can use in its next pitch for donations.

Which brings us back to the late Second Chance. HSUS’s use—or abuse—of this horse for fundraising purposes is maddening, since Second Chance (and the dozens of other horses found with him) may have been better off humanely slaughtered months ago rather than being left to endure a slow death in the company of his “rescuers.”