UPDATE (5-13-11): Atlantic Publishing has confirmed that it does not currently contribute to HSUS, but it does give generously to community-based animal shelters, rescue groups, and animal parks. Atlantic has also created a new donation page emphasizing that its donations go to local animal shelters. The publisher says this new page will appear in all new books and reprints. Thanks to Atlantic, and to all you HumaneWatchers who took action.

One of the themes that keeps coming back to HumaneWatch is that the Humane Society of the United States isn’t what most Americans think it is. According to national opinion polling we commissioned, most Americans think HSUS is a pet shelter umbrella group, that it gives most of its money to groups that care for dogs and cats, and that HSUS is affiliated with their local humane society pet shelter. None of these things is true.

In short, a lot of educating needs to be done so that all Americans are caught up to speed on America’s richest, and perhaps most deceptive, animal rights group. Here’s a new opportunity for HumaneWatch readers (that’s you) to do just that.

A recent message on the “petlaw” listserv (hosted by Yahoo!) from Carlotta Cooper, author of the upcoming book The Complete Guide to Raising Pigs, caught our eye. Cooper writes:

I’ve been working on a book about pigs for a few months.  I sent the last revised version of the manuscript to the editor a couple of months ago and all was well … So, today I get a box of books delivered to my door and I'm completely delighted with them … until I open the book up and right among the front pages is a full-page ad for HSUS!  Not only that, but the publisher and his wife are pledging a percentage of the proceeds from the sale of the book to HSUS.  This is just terrible but I really don't have any control over it, except to tell people don't buy the book.

It’s ironic that a book about raising pigs would feature an advertisement for an animal rights group that wants to completely eliminate the raising of animals for food.

You can find a copy of the publisher’s ad on Google Books in a different work. 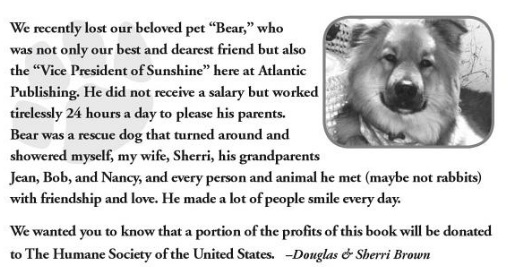 We noticed that the HSUS logo on the ad is old—from at least four years ago. So it’s possible that Atlantic has simply been running the same ad for years. We wonder if the publisher realizes how radicalized the group has become since Wayne Pacelle took over in 2004.

There’s no reason we can’t help Atlantic Publishing learn about HSUS too. Just be sure to do so politely and let the facts speak for themselves.