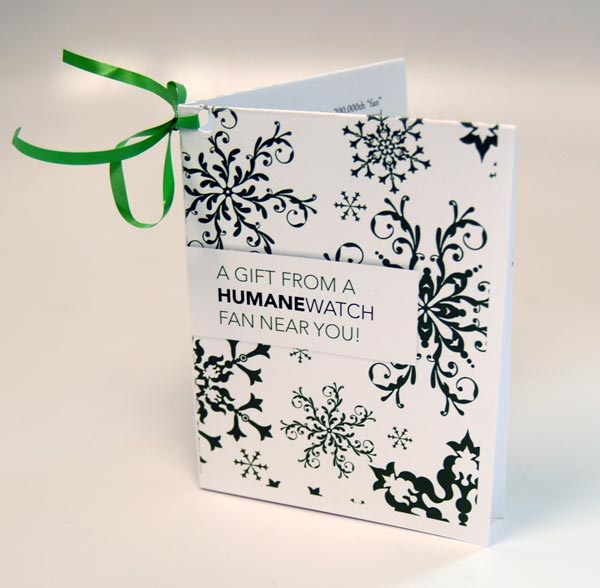 A huge thank you goes out today to all the HumaneWatchers who participated in Saturday's inaugural Shelter Supply Saturday. Judging from Facebook activity and the flood of e-mails we’ve received, nearly 1,000 of you descended on your local humane societies and other pet shelters to share pet food, blankets, kitty litter, cleaning supplies, and other much-needed items. More than one-third of you pre-registered on Facebook too. (Thanks!)

If dogs and cats could talk, they would thank you. We’ll host this event again soon—maybe even much sooner than our initial use of the word “annual” might suggest.

It’s remarkable—sad, really—that the nation’s richest animal rights group, one with the words “humane society” in its name, hasn’t managed to organize people to do this sort of good deed. We should all understand by now that real "humane societies" are nowhere near the top of the Humane Society of the United States’ priority list. Perhaps they see any grassroots giving to shelters as needless competition for resources.

Something else happened on Saturday, too: While you were giving out of the goodness of your hearts, HSUS was making a cynical ploy to shore up its flagging support from the shelters themselves. At one minute past midnight on Sunday morning, HSUS used Twitter to suddenly announce a “first annual 25 days of giving” shelter program.

If this “25 days of giving” sounds too good to be true, that’s because it is. The group apparently expects pet shelters themselves to do most of the giving.

Prior to yesterday morning, we can only find one mention of the HSUS “25 days” project. (Google couldn’t find any until this morning.) It was in a November 23 e-mail to a list of shelter staff and volunteers.  But there was nothing on HSUS’s website, blog, Twitter account, or Facebook page until a single “tweet” went out in Sunday’s wee hours. Even this morning, searching HSUS’s website for “25 days of giving” turns up zero results. 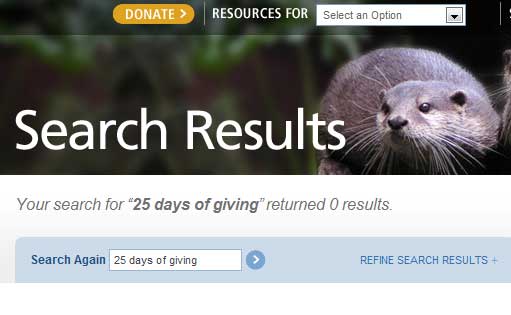 What’s going on? It seems HSUS is trying to use social media to leverage a tiny promotion into free media. After your success on Saturday at doing what HSUS should have been doing all along, the whole promotion (and its sudden PR push) is clearly a move calculated to save face.

And to make money, of course.

When you follow the link on HSUS’s “tweet,” you find another link to the “25 days” PR stunt. Only members of HSUS’s “Shelter Partners” network can see all the details, but here’s what the group is telling the public:

So HSUS is giving away 25 prizes, all donated by companies that want a little free promotion. There’s no harm in that, of course, but the freebies in this case are what marketing professionals call a “loss leader.”

Why would HSUS give away free stuff? It’s not for the value of the good deed itself.

Consider that second bullet above. Pet shelters pay HSUS for just about everything it provides as a “benefit.” Those are dollars that could be helping animals; instead, they’re fattening Wayne Pacelle’s pension.

And considering the size of HSUS’s cash reserves, these are all things the group should be providing to shelters for free, not merely at a “discount”:

We don’t know if HSUS’s Animal Sheltering magazine makes money or loses it, but no matter: The latest issue (Nov./Dec.), not surprisingly, is little more than a promotional vehicle for HSUS. There’s a full-page ad for Humane Society University, another for HSUS’s Animal Care Expo, and a large ad for HSUS’s “shelter partners” program. (The ad didn't mention anything about the “25 days” of giving.)

The only other advertisers appear to be companies that have donated materials to HSUS—materials which we expect the group converted to 25 “prizes” instead of sending them immediately to needy shelters.

Kudos, again, to all of you who made a different choice, and helped pet shelters yesterday for the sole purpose of doing the right thing. The first Shelter Supply Saturday was a huge success, and we’ll certainly do it again.  We’re still collecting e-mail testimonials for a later blog article, so feel free to write to HumaneWatch about Saturday’s uplifting experience.