In response to criticism about its spending practices, the Humane Society of the United States is fond of saying that it “provides hands-on care to more animals than any other organization.” It’s a strong talking point, and as far as we can tell, it’s true–if you exclude many cattle feedlots, a handful of dairies, and an awful lot of chicken and egg producers. And a few large pet-store chains. (All those goldfish!) And the biomedical companies that breed mice for testing to seek cancer and AIDS cures.

But we digress. If nothing else, HSUS’s claim needs a little context. How efficient is HSUS’s hands-on animal care in comparison with other nonprofit groups? 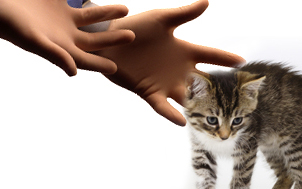 It’s hard to say for certain how many animals HSUS cares for. From browsing through its 2009 annual report, we estimate that figure to be about 66,000: 10,000 animals via HSUS’s “animal rescue” team (although those are temporary care situations); 16,000 in veterinary treatment and wildlife sanctuaries; 40,000 spay/neuter cases during HSUS’s Spay Day (also temporary). Unlike in previous years, HSUS didn’t break it all down in a nice info-box in 2009, so there’s some guesswork involved.

If anything, our number is probably overly generous. HSUS says that those 40,000 spay/neuter procedures were “performed by nearly 400 organizers in 24 countries during HSUS and HSI Spay Day events.”—which sounds like HSUS itself hardly saw any of them. And as the indispensable YesBiscuit! blog has showed us, HSUS’s “rescues” sometimes result in certain death for many “saved” animals anyway.

HSUS’s total expenses were about $130 million, meaning that it spent about $1,970 for every animal it provided with hands-on care.  How does this number stack up against real humane societies?

The Kentucky Humane Society is on Worth magazine’s “Top Ten Most Fiscally Responsible Charities” list. (HSUS no longer makes the cut.) KHS says it adopted out or spayed/neutered 15,194 animals in 2009, with a budget of about $4.7 million. That‘s just $309 per animal.

Florida’s Halifax Humane Society says 15,000 animals pass through its shelter every year. Its 2009 budget was about $1.8 million. That works out to $120 per animal.

The Greenville Humane Society in South Carolina spays and neuters 10,500 animals a year on a budget of $1.2 million. That’s $114 per animal.

It seems clear to us that HSUS adopted its “we care for more animals than anyone else” line to puff up its image and deflect our criticism that it shares less than 1 percent of its budget with the shelters that do most of the real work. If HSUS agreed to spend 50 percent of its budget on funding pet shelters, it could do a lot more for animals directly.

HSUS has other spending priorities, of course—such as shoveling millions into its pension plan and paying millions more to lobbyists. It also maintains a staff of 30 lawyers to pursue its animal rights agenda in the courts. (HSUS funds this activity by raising money with its misleading cat-and-dog public image.)

We would expect that HSUS employees—many of whom read this blog regularly, judging from our server logs—might respond that lobbying helps save animals too. That may be, but it certainly doesn’t count as hands-on care. And HSUS’s lobbying doesn’t always extend animals’ lives: Hens in HSUS-favored “cage-free” systems have higher rates of disease and death, for instance.

For animal-loving Americans who want their donations to care for cats and dogs instead of lobbyists and lawyers, their local humane societies will give them the best bang for their buck—without all of HSUS’s baggage and excuses.